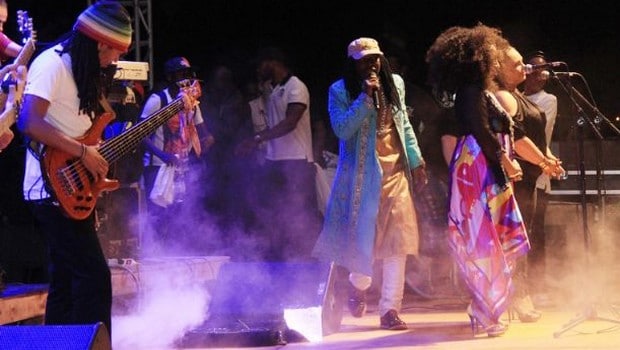 Ivory Coast: Tribute to the Elephants by Alpha Blondy

The French-speaking reggae star, Alpha Blondy gathered on Saturday thousands of fans at the Culture palace (Abidjan / Ivory Coast). The artist decided to offer to his public, a free show as tribute to the Elephants of Ivory Coast, winners of the 30th edition of the African Cup of Nations (AFCON 2015) competed in Equatorial Guinea.

Neither the unexpected incidents (wounds of two musicians), nor the rain even less the power cut prevented Alpha Blondy from answering the expectation of his thousand fans. The show started with a big delay but the party indeed took place.

Before going on stage, the podium was opened by artists of international fame as Pierrette Adam, Monique Seka, Goodie Brown or Nash. The star of Reggae went through all his directory; from « Jerusalem » to « Peace in Liberia » including « Sergeant« (« Corporal« ) « Sabari« , « Politiqui » and many more.

Apart from the celebration of the victory of the Elephants at the AFCON 2015, the show by Alpha Blondy also announced the opening of his new radio stattion « Alpha Blondy FM« .