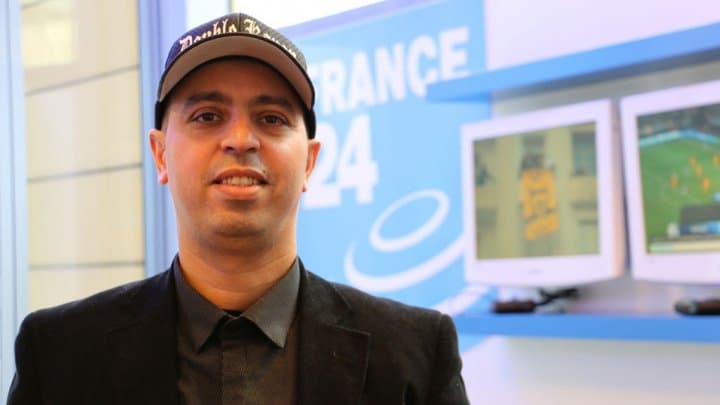 Lotfi Double Kanon: the Algerian rapper who says no to a 4th mandate of President Bouteflika

« I did not choose Rap in order to entertain people. I make songs which push people to thinking, to debate, to mentalities changing. » The message is clear!

« Song is not only intended to entertain people or to make them dance during wedding celebrations. I do another thing better than entertainment. »

The rapper Lotfi Belamri nicknamed Lotfi Double Kanon thus clearly took position against the fourth mandate of President Bouteflika in Algeria. And he said it in a video which is making buzz on the Web. « Kleouha » (translated: « They plundered the country », « They ate it up », or still « They gunned it down ») is a big hit on YouTube. Put on-line on March 7th, it was already watched more than 433 000 times in three days!

« I think that he is sick but I hope he is not suffering and he will sooner recover. You know, alone, he can’t do anything. It requires a whole team behind him. He repeatedly changed government staff because he did not, maybe, find adequate people. I experienced the period of 1990s when Algeria was slashed and burnt, and I can say that between 1990 and 2014, things changed a lot. It was not perfect but there was changing. What I regret is that there is no team behind Bouteflika. There is no succession. »

Lotfi Double Kanon was born on July 6th, 1974 in Annaba in the popular district of « La colonne » within a chaouia family. His father is a workman and her mother a housewife. He has two brothers and two sisters; they are all certified in higher education. Lofti Double Kanon has a high school diploma in Mathematics that he obtained in 1992 at « Saint Augustin » high school in Annaba, then a state engineering degree in geology in 1998 at the University of Annaba.

Lotfi chose music and he started with his Double Kanon group in 90s. Very quickly with his committed music, he became the spokesman of a generation, what put him into troubles with the power. In 1997, the concert his was giving onto open-air theater stage in Annaba was interrupted by police forces. Motive: his words were said to be subversive. « When I realized that my words were powerful in the society and that the youth was attracted by these texts, I decided not to make rap to entertain people but to contribute to the changing of my society. »

It would need more to discourage him. With his friend Waheb, Lotfi officially formed the group « Double Kanon » and recorded a first album, Kamikaz.

He said loud and clear what he thought of power: « People occupy post offices while they are not qualified to do the job. The consequence is that they do not then assume their responsibilities. This is why there problems at the level of education for example. People are fed up with mediocrity. There are more qualified people that can represent Algeria whether at international or national levels. And then, another idea concerns the hitch regarding religion. There are rules not to be broken. »

And he recognized: « I disturb because I said out loud what people think silently ».

A rapper rebel, nothing so abnormal?