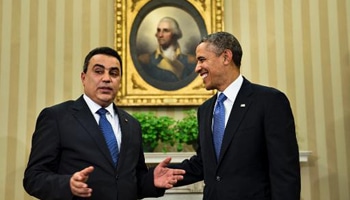 Mehdi Jomaâ, Tunisian Prime Minister was received by Barack Obama last Friday by the United States President, Barack Obama in the White House. And he left with a 500 million dollar loan gauarantee.

Barack Obama evoked Arab Spring, considering that « Certain countries had hard time in this transition« . « But in Tunisia where these popular revolts began, we reached the progress we hoped, even if there difficulties there« .

In French, Mehdi Jomaâ recognized: « We are today at the end of this political transition that was rather well carried out in Tunisia after some difficulties (…) and we are now tackling economic transition. We count on ourselves but we also count on good cooperation (…) with our friendly countries, particularly the United States, in order to give to the youth what they awaited: perspectives in terms of employment, perspectives of prosperity, after this freedom« .

Then in English language, he added: « I can summarize what is taking place in Tunisia, this big project, as a start-up. It is necessary to believe in it, to take risks and to invest »

A 500 million dollar loan guarantee was thus concluded last Friday. The objective is to « facilitate access of Tunisia to international capital markets ».

The first loan guarantee was granted in 2012, up to 485 million dollars.