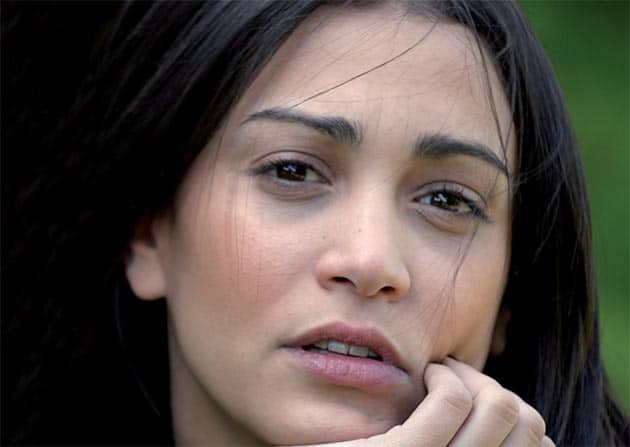 Morjana Alaoui is making buzz with her new movie, Rock the Kasbah, produced by  Laïla Marrakchi. She was born in 1982 in Casablanca. She became known with her movie « Martyrs ».

She spent her childhood in the district of Arfa. After her high school diploma, she continued her studies in Florida then in Paris. It was over there that she was contacted by her cousin Laïla Marrakchi, director of the movie Marock, for a casting.

« By chance, Leïla showed me the scenario. I read it and I was interested… It was the first time that I played in a movie. »

The continuation of her career will not be so easy: « After « Marock « , I went through quite a lot of castings and I failed them all! I was sunddenly discouraged enough, even if besides I continued taking drama courses, because I always believed in it. And just as I was about to abandon and to link up with journalism, I was suggested shooting in Martyrs « .

« At first, it was Vahina Giocante who had to take this role, but for personal reasons, she gave up at the last moment. An actress was thus a little bit urgently needed. A short time later, I received the scenario and I decided at once to make this movie. I was fascinated by the story that I found extremely well written. I thus met Pascal Laugier (the director) and at the end of ten minutes without casting nor anything, he proposed me the role. »

The movie stirred up controversy in Morocco: « I think that they held the movie as hostage to be able to create this false debate between Jews and Muslims. It was necessary for them to find reasons to feed this conflict. Their problem is because they do not bear that we can give a bad image of Morocco, a bad image of Muslim … And they do not succeed in accepting a Muslim woman coping with a Jew, they felt offended. It’s a pity… especially that these criticisms emanated from artists! »

Morjana Alaoui lives today in London. She talked about her career path: « At the beginning, when I began with the movie « Marock », I was not a comedian. Then, I followed drama courses and since then I have made five movies everywhere: an Italian production in Iraq, a German movie shot in Tangier and a French movie that is called « Martyrs ». Then, I made two English movies, as I live in London and one of them that would come out last November. »

But she is still much attached to her native country: « I grew up in Morocco, I know very well Morocco and Moroccans; it is true that I come from a bourgeois environment, but I cope with all other environments, I listen to people and I adore Moroccans. I know that there are some who are shocked but it is in our customs; there is a lot of people who are still not open-minded enough … They need to see women who manage to make their own decisions, independent women, women who manage to exist by themselves and not by their families or via an older brother. »

« I like movies which awaken consciousness, raw movies which have of content, context, which do not arouse a free violence. (…) I would like to interpret a junkie for example. It would not disturb me either to play in a comedy if it is well written, but I have a clear preference for the roles of more tortured characters. I am more attracted by the movies which try to say something, which try to change the world. »

She regrets receiving too many scenarios which do not correspond to her expectations: « Scenarios which I receive, generally concern great stereotype roles, most of the time on my origins. I am not interested in playing in things so familiar. And there I could hardly exaggerate; it is what they propose me. »

On the other hand, she feels well at ease with her role of Sofia in the last movie of Laila Marrakchi, « Rock the kasbah »: « It is a movie on « legnaza », Moroccan funeral with all its traditions. It is about the death of the patriarch. I interpret the role of Sofia, the youngest sister. She returns for the funeral of her father after several years spent outside Morocco. She finds her family and in fact, finds herself a little lost in this atmosphere. She tries to adjust things with her family and finds herself overthrowing a little, order which was established by this patriarch. There are a lot of moments of privacy in the movie which sheds light on Moroccan traditions. It is a movie where we laugh and we cry. (…) I think that in all families in the world, not only in Morocco, it is difficult to say things really. My character succeeds in a frontal way and tries to approach the truth. Unfortunately, social hypocrisy exists everywhere, not only in Morocco. »