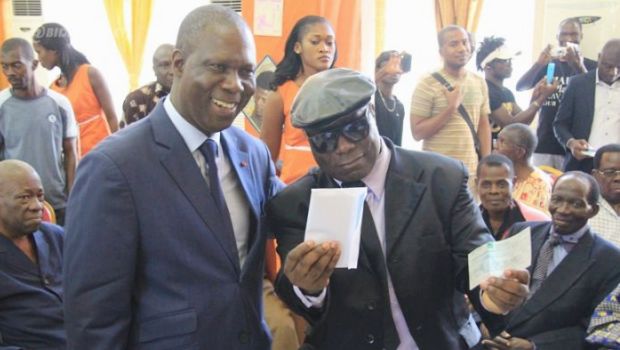 Eba Aka: the artist founds «extraordinary» a gesture from Ouattara

The gesture from the Ivorian government concerning the retirement pension allowance for 300 000 FCFA per month and per artist to several « old glories » of the Ivorian culture, stays engraved in the memories of the cultural actors, particularly, the beneficiaries.

Among them, Jérôme Eba Aka, one of the old glories of the Ivorian music and beneficiary of a special pension from the Ivorian State, decided to show loud and clear his gratitude to the Ivorian first citizen, the Head of State, Alassane Ouattara.

« Mr. President of the Republic, by granting us this pension, you save us from begging in front of the offices of our executives« , asserted Eba Aka.

And he added in these words: « What the President of the Republic did is something extraordinary. He noticed that artists were sadly abandoned to their own. He wanted to give us the possibility of being self-sufficient instead of being beggars in front of offices of our executives« .

He gave this speech in the framework the annual celebration of the Association of the natives of Aboisso department living in Bouaké.

According to him, « the President of the Republic, through this gesture, remembered himself that there are deans who lived with problems, and this gesture he did has no price. We can only thank him« .

Artist musician, singer, composer, Jérôme Eba Aka was ranked number one of the Ivorian music in 1978 with his successful title « Trahison« .