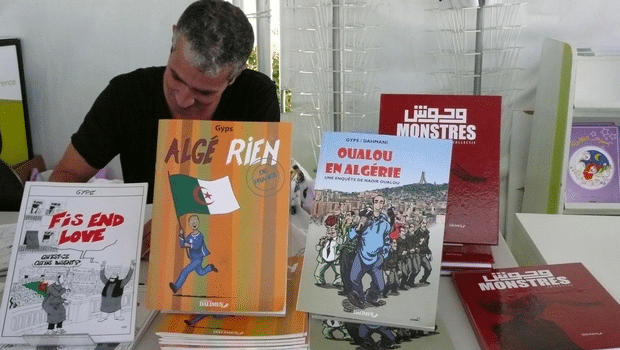 Fibda 2014: Algerian and Brazilian cartoons in the spotlight

The Algerian Minister of culture, Nadia Labidi proceeded on 24th September 2014 to the official opening of the 7th Cartoon Films International Festival of Algiers (Fibda) in the Algerian capital town. Brazil, invited country of this edition of the festival, will share its rich experience with the Algerian cartoonists and this until 27th September. According to the official news agency of Algeria, 37 countries take part in the meeting.

Algeria will not have a walk-on part in Fibda 2014. The country honors through an exhibition, authors as Benattou Masmoudi, Djilali Defali and Hiahemzizou Noureddine considered as the pioneers of the 9th Algerian art. We should remind that Hiahemzizou Noureddine was the designer of posters for several Algerian movies as « Hassan Terro » (Mohamed Lakhdar Hamina) or « L’enfer a dix ans » by the late Abderrahmane Bouguermouh.

Djilali Defali, inspired by texts of the French-Algerian politician and writer, Azouz Begag, realized the comic strip « L’Emir Abdelkader, l’amiral des sables » that is also displayed at Fibda 2014. This work has both didactic and historic aspect because it teaches the history of Algeria to the new generation.

The Minister, Nadia Labidi seized the opportunity to invite the Algerian national television to support the efforts of the young directors by producing their works. As reminder, Brazil, guest of honor at the festival, exhibits about sixty plates that tell the rich experience of the country (more than 150 years) in this domain.