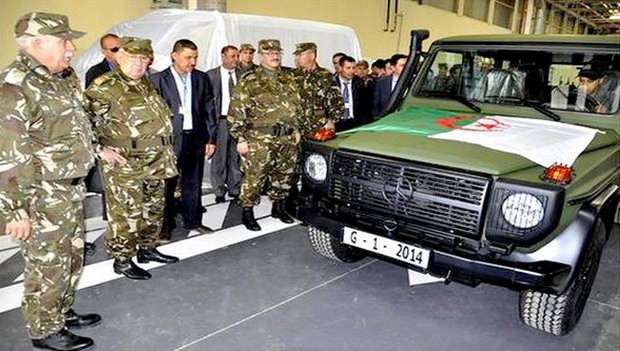 Algaria: the army is equipped with car manufacturing factory

General Ahmed Gaîd Salah, the Algerian vice minister for National defense proceeded on 26th October 2014 to the inauguration of the first car industry of the country. For the event, the minister attended at the display of the assembly lines of two Mercedes Benz cars.

The participation of Algerian companies and army in the project is estimated at 51 %. The second part of the capital of the company is detained by the investment fund from the United Arab Emirates, « Aabar« .

The new factory installed in the Algerian region of Tiaret will not make military cars only. It will also offer its services to all Algerian civil population.

« For the first stage and during the first years, the factory will make various commercial vehicle types and 4×4 intended to civil uses« , indicated a person in charge in the company.

According to Ecofin Agency, three industrial and commercial public institutions (EPIC) specialized in the military industry were created within the framework of partnerships with German companies. They concern electronic systems, industry of cars and promotion of mechanical engineering industries.