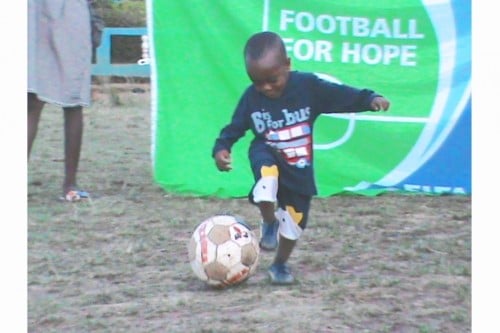 Fifa: the Nigerian Chukwu, winner of the «Football for Hope Siyakhona»

At 12 years old, the young Nigerian, Marvelous Chukwu was appointed winner of Picture Football for Hope Siyakhona competition. The picture of Marvelous got 4166 votes and was elected among the 24 shortlisted. The prize-winner gave a comment on his picture as following:

«My picture tells the story of a very young boy that passionately loves football. We can notice happiness over his face when shooting the ball».

Besides α/DSLR cameras and memory cards awarded to him, he will also benefit from training in communication broadcasting businesses. «This Siyakhona media training schedule helped me to know how to appreciate all what is going on around me in my community. I love snatching pictures. I would like photography to be part of my studies when I will be grown up», he specified.

« Siyakhona » that means « we can do it » in Zulu, was launched in 2009 before the World Cup South Africa 2010. Jointly organized by Fifa and Sony, the competition is intended to young people from poor environment, aims at endowing the latter with the necessary skills to be able to find job in the media and communication sector. Today, the initiative has already touched more than 400 young people in more than 40 disadvantaged communities. Let us remind that young people from Brazil, India, Kenya and Australia also proposed pictures.