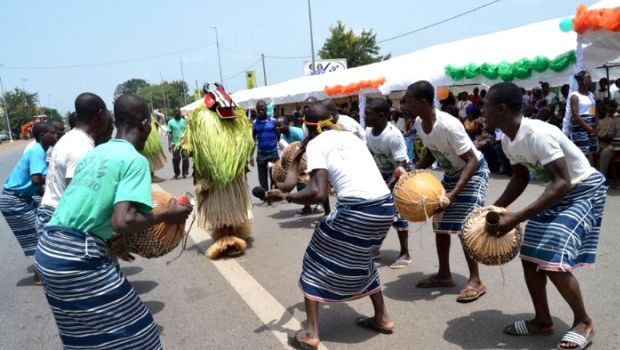 After decades of interruption, Foire-Forum-Carnaval (Fair-Forum-Carnival) reopened its doors on Tuesday in Bouaké (in the North at 379 km far from Abidjan).

The Foire-Forum-Carnaval Bouaké remains the cultural, commercial and economic event having contributed to forge its prestige in the past.

It is the Mayor of the municipality of Bouaké, Nicolas Youssouf Djibo who proceeded to the opening of this big meeting which takes place from 5th to 12th April 2015.

In his speech, the latter indicated that « the new version of the mythical Carnival of Bouaké that during five days has for ambition to make of the capital of Peace, the national capital of business opportunities for craftsmen, Small and medium-sized enterprises and, arts and culture sectors« .

On the agenda of the activities of this edition 2015, the return of drum majorettes, miss carnival Bouaké competition, masquerade ball and fashion show of the carnival. It will end up with the incineration of the king carnival planned for next Sunday on the Boulevard of the independence of the city.

Outside this « Foire-Forum-Carnaval », will be held on Thursday, a meeting of the leaders of the secondary cities of the West African Economic and Monetary Union (WAEMU) to establish a common network.

According to the organizers, the ambition is to create real development poles that will help easing congestion in the capitals of the WAEMU countries, cities that have become real megalopolises.