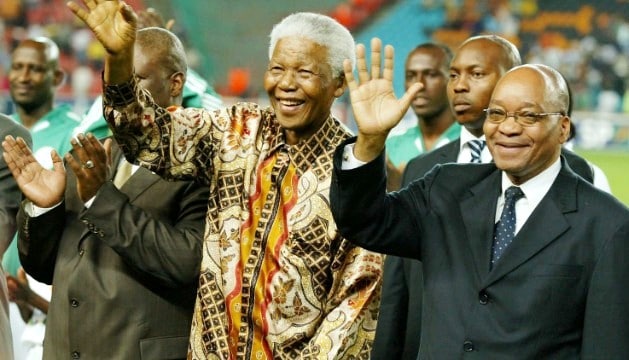 Mandela Day: Jacob Zuma in Mvezo today in order to clean a scholl

For the very first time since the death the South African former president, Nelson Mandela on 5th December last year, the whole world is celebrating on Friday, 18th July « Mandela Day », recognized by the UNO five years ago.

An outfit of activities is thus scheduled in the big cities of the world in homage to the values of the anti-apartheid activist.

Among activities in which people can participate, there are a cleaning of streams, health centers or schools, refuse collection, etc.

For the occasion, the South African president, Jacob Zuma, will be present in Mvezo (South), Nelson Mandela’s home town, where he will participate in the cleaning of a very new school.

He thus called on his fellow countrymen to bring out brooms and floor clothes.

« For the first edition in 2009, there were two cities where Mandela Day is launched: Johannesburg and New York. In 2014, 126 countries of the world are taking part in it, with more than 1.000 shows« , specified very delighted, the manager of the Mandela Foundation, Sello Hatang.

This first edition was marked by a talk in Paris, concerts in Arles, New York, Dallas, London, Edinburgh or Glasgow, the release in China of the movie that was dedicated to him last year.

Tireless fighter of the segregationist apartheid regime that imprisoned him during twenty seven years, Nelson Mandela managed to avoid a civil war by becoming in 1994 the first Black president of democratic and peaceful South Africa, having known how to forgive his former jail keepers. He was 96 years old.