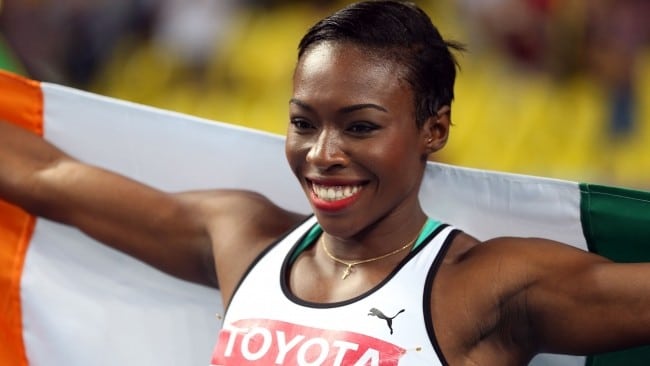 The Ivorian athlete Murielle Ahouré is the distinguished guest of the 18th meeting Gabriel Tiacoh that will be held on 26th April 2014 at Félix Houphouët Boigny stadium (Ivory Coast). The silver double medal-holder of 100 and 200m in world championships 2013 was welcomed on Tuesday evening in Abidjan by executives of sports in Ivory Coast.

The Ivory Coast ambassadress felt « honored » to participate in this sports meeting besides other athletes. The athlete, decorated in September 2013 after a brilliant performance in world championships 2013, has a busy diary.

According to the Ivory Coast site abidjan.net, a warm-down session is planned for Murielle Ahouré on 23rd April before a training the next day Félix Houphouët Boigny stadium. The Ivorian star is « eager to put on studs » for 100m women.

The Meeting Gabriel Tiacoh is organized in honor of the only Ivorian Coast to have won a silver medal in an Olympic competition.

Murielle Ahouré was born on23rd August 1987 in Abidjan. Daughter of a General in Ivory Coast land forces, she left Ivory Coast at the age of 14 years old for the United States where she began athletics.