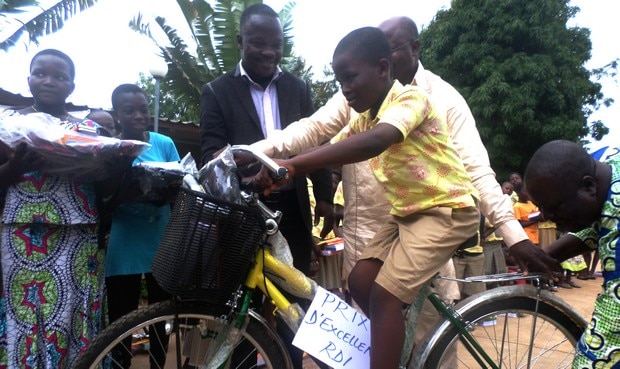 The RDI-France buying group supports excellence in the countries where they operate, with the René Descamps prize of the name of its founder. In Togo, three schools (CS E-snam, Kpime Woume and SOS children’s village of Kara) won the prizes involved for this year. The pupils of the Hermann Gmeiner School, a structure of SOS children’s village of Kara were the last to receive their donations on 22nd August 2014 in Kara. The ceremony was marked by the presence of political authorities (Member of Parliament, BOUWASSI Dadja), administrative, French volunteers of the « La petite Vigne » association and by a crowd of pupils.

On Friday, a delegation of RDI-France proceeded to the delivery of the René Descamps prize of excellence to 58 pupils of the Hermann Gmeiner School of SOS children’s village (Kara). The choice of this school complies with the same criteria that led to the two other precedents. Indeed, only schools having obtained a success rate of 100 % at CEPD (primary school ending certificate) can benefit from the prize.

The little TIZA Essozimna Gérard (11 years old) was the great prize-winner. Apart from school items (exercise books, bag, pens, rulers, academic kit), he left with the bike kept for the most deserving pupil. Indeed with an average mark of 19,50, TIZA is not only the first of his school but also of the whole examination center.

« We are preparing the executives of tomorrow, our future partners and customers« , indicated Eric Komla G. AMETSIPE, ECOWAS Itinerant Representative of RDI-France. The recipients were very happy.

Indeed since its creation in 1995, Hermann Gmeiner School has always obtained a 100 % success rate. The school did however never receive a similar recognition.

« It is the first time when a company of a so great importance had the kindness to encourage pupils succeeded at 100% at CEPD in our school. We are grateful to you« , indicated the spokesman of the prize-winners.

As reminder, besides the school kits offered to 58 pupils, a cup, a megaphone and educational material were put handed to Hermann Gmeiner School of SOS children’s village.

RDI-France is a buying group based in Montrouge (France) near Paris Orly Airport. The company has 40 years of experience on the import export market in Africa, Europe and Madagascar.