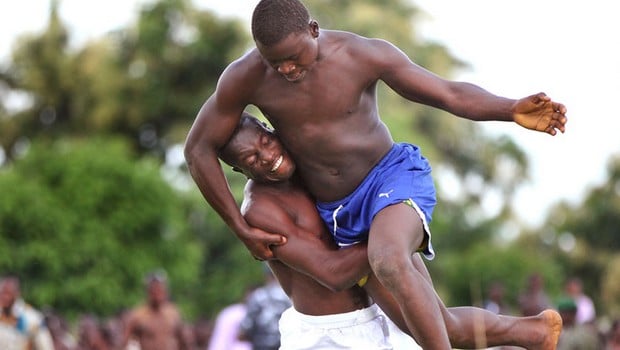 Every year, the second half of July is dedicated to the celebration of Evala in Togo. Traditional festival at first, the event has taken an international scale attracting thousands tourists and curious people worldwide.

Evala is an initiation rite for Kabyè people (Ethnical group in the North of Togo). For about two weeks, young people from the various areas of the Kozah prefecture are engaged in a traditional wrestling. The objective is to prepare these young men for adult life.

The myth that surrounds the event attracts every year many people and creates liveliness in this part of the country usually quiet. Hotels are overcrowded by visitors and storekeepers seize the opportunity to realize good business.

During the periods of Evala, the numerous places of interest of the locality (zoo, national museum, Tamberma castles…) are also visited by curious people.

For the edition 2014, it is planned several events among which huge concerts, operations of raising sensitizations on the HIV / AIDS and sessions of free screenings. The President of Republic of Togo, Faure Gnassingbé, government members as well as diplomatic representations accredited in Togo all usually travel to the Kara region during the periods of Evala.