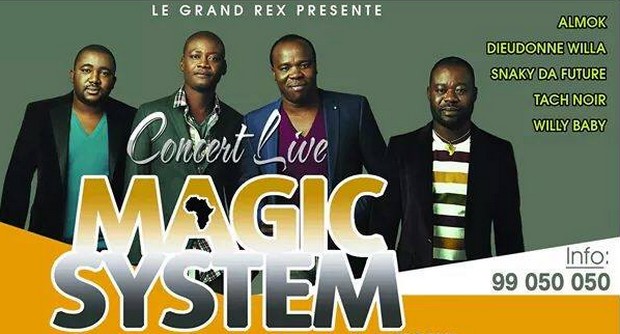 « Is everybody ready in Lomé??? Magic system is coming in force for 2 great concerts!!! » It was in these words that the Ivorian group, Magyc System, announced its arrival in the Togolese capital town for two shows on Friday, 14th and Sunday, November 16th 2014.

The Togolese public is getting ready to take part in the magic of the most famous African group of moment. « On air » and the whole album « Africainement Vôtre » brought out in May 2014, will be offered to the Togolese, fans of the Ivorian group.

In order to allow all social levels to experience these intense relaxation moments offered by the « Magicians« , it is planned apart from the VIP evening of 14th November, a show at the municipal stadium of Lomé on 16th November.

Several Togolese artists among whom Almok, Dieudonné Willa, Snaky Da Future, Tach noir or the young star, Willy Baby will also be a part of the show. The Magic System group recently attracted a big crowd during its concert in Bamako in the Malian capital town.

As reminder, the group won its 16th gold disc with its album, « Africainement Vôtre » during its second visit at the Olympia.