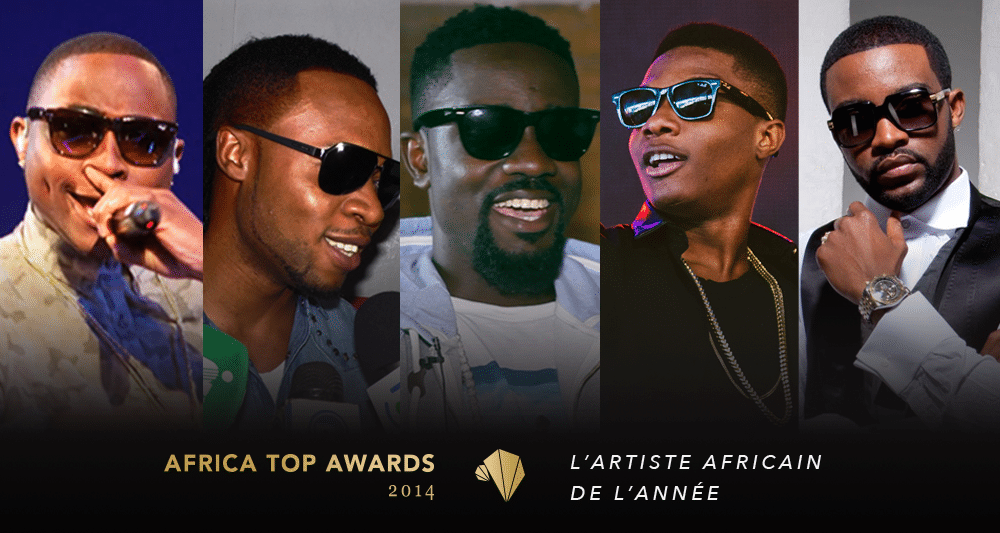 Africa Top Success Awards 2014: Vote for the African artist of the year

The West Africa dominated the African musical scene in 2014 with the revelation of new talents of the Afro music. The Nigerian and Ghanaian artists are so in the front row for the various international rankings.

This new trend (Azonto, Skelewu, Gweta) does not however overshadow the previous African tones. The Ivorians as well as the Congolese remain respectively faithful to the Coupé Décalé and the Dombolo rhythms.

The category of « The African artist of the year » constitutes a real panel of the ambassadors of the African music. The nominees are shortlisted by Africa Top Success’s editorial staff on the basis of their activities realized during the year 2014.

Who will be elected the African artist of the year?

The year 2014 is successful for the Nigerian artist, Davido. Elected the best international music of Africa at the BET AWARDS 2014 and the best male artist at MTV Africa Music Awards 2014, Davido is at top of his glory. The promoter of the famous Skelewu dance multiplies tours in the European, African and American capital towns and attracts millions of spectators during his shows. On YouTube, his videos are visualized by millions of Internet users. With “Aye“, one of his recent titles, he is ahead of the American stars, Beyoncé, Kelly Rowland and William (Say Yes) in terms of audience.

Nicknamed the Di Caprio of RDC, Fally Ipupa Nsimba was born in Kinshasa on 14th December 1977. He was a member of the Latin Quarter group of Koffi Olomide during almost 10 years before standing on his own two feet by pursuing a solo career.

Some people support that Fally is the first Congolese artist of his generation to have tried the adventure of a bivalent musical career.

Extremely shy in his early childhood because of his stammering and lisp, Fally Ipupa is a complete artist today who seduces millions of fans during his multiple concerts marked by his « swaying hips ».

Flavour is popularly known through Africa and the whole world for his banger massive club « Nwa baby » (Ashawo Remix). He is at present signed at 2nite Entertainment Music Label.

The singer presented numerous concerts and organized social events and he is well known for his capacity to fluently sing in the Igbo language, a dialect of his native Nigeria.

His training in music allowed him to learn music production.

In an interview recently granted to the iROKTV channel, Falvour declared this: « I think that I become more and more mature. I must be more mature with my music, my words and instruments« .

Considered as one of the main promoters of the Azonto dance, Michael Owusu Addo known under the name of Sarkodie is a « multi-form rapper » because of the various musical styles he possesses.

Sarkodie often does rap in his mother tongue, Twi. Many Ghanaians recognize him as being one of the main hip-hop and hiplife artists in the country.

Born on 10th July 1985, Sarkodie grew up in Tema and is the fourth of five children. He won several prizes and nominations going from « the Artist of the year » to « the Album of the year« . His second album, Rapperholic, won three Ghana Music Awards over 12 nominations.

Arranger, Composer-songwriter, Wiskid is known through his song « Holla at your Boy » in 2009.

Ayodeji Ibrahim Balogun alias Wizkid is the last one of a siblings of 6 children.

He started singing at the age of 11 years old but his career really took off in 2009 after he had signed one million naira contract with the Empire Matt Entertainment (EME), a recording label managed by one of the best R & B and producing artists, Bank W.

His musical career has gone beyond the Nigerian borders especially with his numerous international representations and with his collaboration with international artists such as Akon and Yong Jeezy.