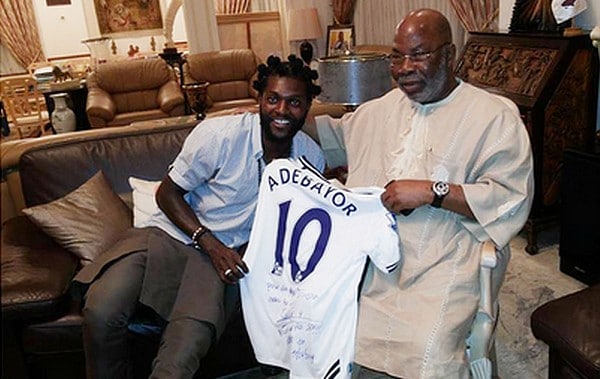 Togo: Adebayor paid a visit to Gervais Djondo, the boss of Asky

Adebayor Sheyi is enjoying good time in Lomé. The striker of Tottenham in holidays in the Togolese capital town for some days, enjoying himself as he usually does it. Considered as one of the major stars of the country, Emmanuel Adebayor visited on Saturday another Togolese who is also making the pride of his country, Gervais Djondo, the former Minister, founder of Ecobank and the Pan-African airline company Asky.

Adebayor Sheyi is making the tour of influential personalities of Togo. Noticeable in several pictures with the humorist Gogoligo back from his American tour, the International Togolese went to the Aéroport International Gnassingbé Eyadema some days ago to welcome the victorious Toofan group, winner the prize of the Best French-speaking artist of MTV Africa Music Awards 2014 in Durban (South Africa).

Last Saturday, Adebayor Sheyi visited Gervais Djondo in his house. He offered to this latter a shirt dedicated by his club Tottenham, according to the Republic Of Togo site that revealed the information.

The boss of ASKY, the Best African Company in 2014, has several common points with Adebayor Sheyi. Both men honor their county, Togo. Before 1994, nobody gave credit to the creation project of Gervais Djondo’s modern Pan-African bank. Today, his Ecobank group is operational in 33 countries of western, central, eastern and southern Africa.