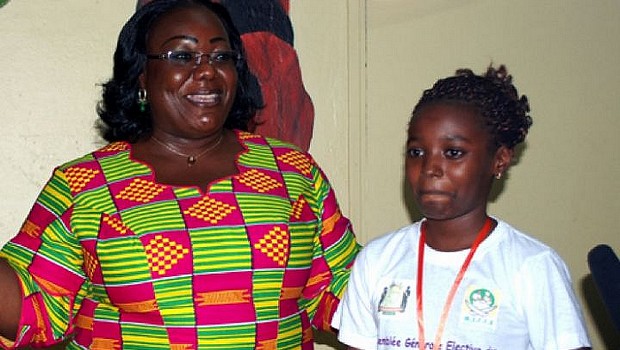 Grace Lath Akaffou was elected on Sunday, 27th July 2014 as the new chairwomen of the children parliament of Ivory Coast for a 4 year mandate. Grace Lath Akaffou placed her mandate under the sign of the protection of the poor children. The exercise allows to teach democratic values to the new generation from the low age.

Grace Lath Akaffou is 12 years old and is in form three. The native of the Haut Sassandra region widely defeated her opponent Grace Emmanuela Koffi during the second round of the ballot by 45 votes against 35. The organization of the ballot was appreciated by the Ivory Coast Minister of Solidarity, Woman and children Family, Anne Désirée Oulotto.

« I saw how in a climate of discipline, democracy and very seriously, you carried out your public-spirited duty. I would like to express to you in the name of the President of Republic, in the name of the Chairman of the Parliament, our satisfaction and our pride« , she declared.

The new chairwoman has a well-defined program. « My mission will be to defend the cause of children who do not go to school, marginalized girls« , she revealed.

Grace Lath Akaffou and her team will be welcomed within the next days by the Ivory Coast Parliament.

The children parliament of Ivory Coast was established by decree in 2013. It represents a space of expression for children and participates in the protection of the rights of the latters.