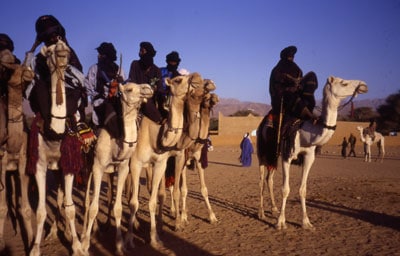 Niger: the discovery of gold in Agadez creates movements

The peaceful locality of Djado, situated at 700 km far from Agadez lost its serenity. The plateau that could hardly counted some hundreds inhabitants registers more than 8000 souls today. According to the site of RFI, this massive movement of the populations is caused by gold discovery in this part of the country.

The plateau of Djado formerly hostile because of the lack of water and food, has become since last April, the main destination of gold diggers coming from various countries. « In the beginning, there were lacks, particularly lack of food. Later on, storekeepers started bringing products. Now, there are water and the food available« , explained Mohamed Hassan, inhabitant of Djado and in charge of missions at the cabinet of the Prime Ministaer, quoted by RFI.

According to the same source, migrants trying to join Libya or the West often make stopover to find gold and make fortune before continuing their adventure. « There are actually even migrants. Instead of going to Libya, they go on the field to work and find some gold« , confirmed Mohamed Hassan.

The correspondent of RFI present in the area estimated at 20 grams, the gold quantity the researchers discover by day. The main mining resources of Niger are gold, iron, coal, uranium and oil. In spite of this wealth, the country is considered in 2012 as the least developed in the world according to an annual report by the UNDP.