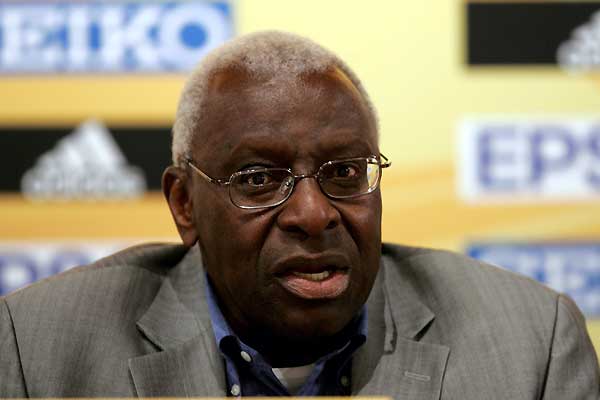 Lamine Diack: the president of IAAF honored by Macky Sall

In August 2015, the Senegalese Lamine Diack (80 years old) will leave the head of International Association of Athletics Federations (IAAF). After 15 years of management of the world institution of athletics, Diack can be proud of his results. In his native country, he is considered as a model for African continent. During the last meeting of the executive council of International Association of Athletics (IAAF) in Dakar, he was raised to the rank of Commanders of the national Order of the Lion by the president of Republic of Senegal, Macky Sall.

His only regret is not having been able to make IAAF richer. « I would have well liked making IAAF richer as FIFA (editor’s note International Football Federation) », indicated Lamine Diack in Dakar. Nevertheless, the Senegalese leaves the association in a perfect financial health. His actions at the head of the institution are praised by all.

IAAF with Lamine Diack was equipped with a program of development, China came back in the rows and Africa is represented in several world institutions. One of innovating programs to add the list of achievement of president Diack is « kid’s athletics. » This program which consists in introducing athletics into elementary schools participated in the universalization of the discipline.

« Humbly, he grealy contributed to the brilliance of world athletics and for us all, it is a model, I was very happy to see him honored here (…)Lamine Diack is a Nelson Mandela for us sports leaders », indicated Hamad Kalkaba Malboum, chairman of Confederation of African Athletics (CAA) to APS.

Before being world athletics figure, Lamine Diack was a confirmed sportsman. Specialist of broad jump, he was also a football player in Dakar club Foyer France Sénégal (FFS). Technical director for national team of Senegal from 1964 to 1968, he was a chairman of National Olympic Commission of Senegal in 1985 before taking the head of AAIF in 1999.