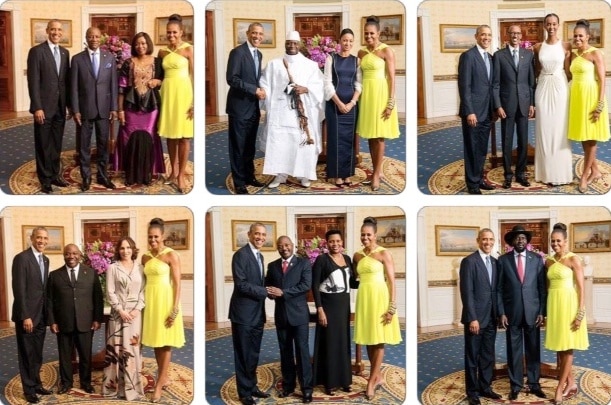 End of the USA-Africa Summit: the couple Obama posing with African leaders

Everybody would like one day with a few exception to pose in picture with the presidential couple of the first power to the world. It is not the African leaders who will tell us the opposite.

Indeed, on the closing ceremony of the USA-Africa Summit in Washington, the couple Barack and Michelle Obama took individual pictures with the participating African heads of States in this high-level meeting.

The presidential couple devoted itself to this exercise with enjoyment and we should well note, with about forty heads of States and governments as well as other actors of development of the continent.

This, in order to immortalize this meeting that represents a major challenge in the link of both continents.

Over this succession of pictures, we notice that Barack Obama always makes the same pose and the same smile.

And according to inquiries, the current and the 44th president of the United States, since his first mandate on 4th November 2008 and reelected on 6th November 2012, has almost made the same poses with the same smile.

Son of a Black Kenyan and an White American woman from Kansas of Irish origin, Barack Hussein Obama II, born on 4th August 1961 in Honolulu in Hawaï State, is the first Afro-American having reached the presidency of the United States.