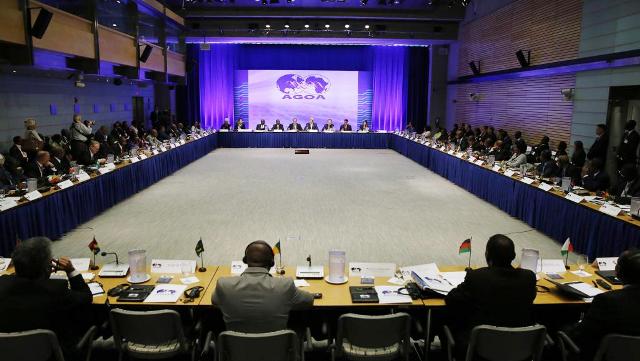 Would Africa have become the continent the most desired by the world? With growth rates higher than 6 %, the Black continent continues to attract foreign investors among which, the United States.

Conscious that Africa abounds in potentialities and remains an expanding zone of all opportunities, Barack Obama has just mobilized 33 billion dollars – public aid and private investments in favor of Africa.

In other words, these funds will contribute to the development of the African continent and to the job creation in the United States.

The American president declared this on Tuesday, the 2nd day of the USA – Africa Summit that gathers more than 40 African Heads of States and governments in the federal capital town.

He then called on the leaders of the continent to create a political and economic environment convenient to businesses.

« The United States massively invest on the long term in the progress in Africa« , declared Mr. Obama, who reminded that « the exchanges of the United States with the whole African continent were equivalent to those realized with the only Brazil« .

« Over all the products we export worldwide, only 1 % go towards the Sub-Saharan Africa« , he added.

In front of an outfit of leaders and businessmen, the American president announced that American companies, Marriott, Coca-Cola and General Electric in particular, had made a commitment on investments for a total amount of 14 billion dollars in the sectors of energy, water, hotel business and building, bank or information technologies.

The private sector also increased its promises of investments within the framework of the Power Africa program that aims later, at doubling the access to electricity in the sub-Saharan Africa.

The American Treasury secretary, Jacob Lew reminded on Tuesday that Africa was « the second region of the world with stronger economic growth« .

We should underline that Mr. Obama has, for a long time, insisted on the heavy responsibility of the African leaders.

« So crucial are these investments, the key of the next growth era in Africa is not here in the United States but rather in Africa« , he insisted.