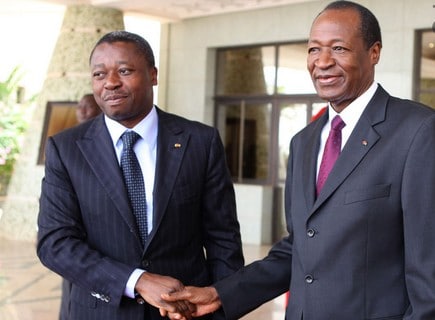 The president of Republic of Togo, Faure Gnassingbé paid on 12th May, a visit of a few hours to his neighbor of Burkina Faso, Blaise Compaoré. Both Heads of State tackled questions related to integration of the sub-region and the strengthening of bilateral relations between both peoples.

For Blaise Compaoré, the visit of his Togolese homologue, is placed under the sign of integration. The organization by Burkina Faso of the celebration of the 20th anniversary of UEOMA was at the heart of discussions.

« I came (…) Within the framework of the relations that we maintain, we are two nearby countries, we belong to common organizations, we spoke exactly about the 20th anniversary of UEMOA », explained the president of Burkina Faso in front of the press.

The facilitator of the global political agreement between Togolese politicians in 2007 also indicated that he evoked the bilateral relations with Togo. According to the local press of Burkina Faso, the discussions between both men would be of economic matter.