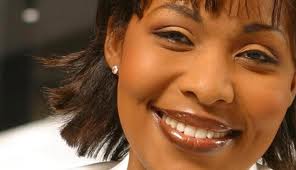 Lerato Mbele: the South African icon of the news!

She is extremely charming and she has a well-made head.

Lerato Mbele is one of South African TV icons. She is a journalist and a presenter for the BBC. She was previously known with Newsday on the BBC World Service.

She has a master’s degree in economics of development, politics and international relations which she obtained in the University of London.

She started working for the South African Broadcasting Corporation in 1999. In 2007 Mbele joined CNBC Africa during its launching. In 2012 Mbele joined BBC News and thus presents Newsday on the BBC World Service with Lawrence Pollard.

« I am excited to present Africa Business Report. It is the opportunity to show to what extent Africa became a region of growth, exchanges, innovations and entrepreneurs. In spite of very important problems, Africa shows signs of changing and it is what we shall try to reflect in this new programme. An opportunity to seize! »