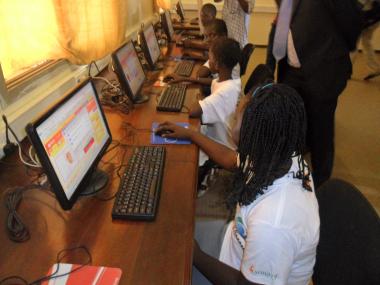 ECOWAS Center of Gender Development (CCDG) based in Dakar, granted scholarships of excellence to 17 Senegalese girls. The institution which makes equality of opportunity between Man and Woman a major concern, intends to encourage feminine gender to be interested in scientific domains.

Comings from region of Dakar, Thiès and Diourbel, 17 profitable girls of the scholarships from Economic Community of West African States (ECOWAS) were chosen for their brilliant study path in scientific and technical domains. Beyond excellence, the girls of secondary schools chosen are also poor persons. The value of the scholarships which varies between 300 000 and 500 000 FCFA will help the recipients to continue their studies.

« Education of girls has a positive impact on woman promotion as far as it is going to favorably participate in economic and social development of a country (…) Education socially and economically strengthens power of women and girls, their capacities to transform society and to create the best living conditions for all at family level and various community and national levels », indicated Marie Françoise Wininga, representative of CCDG.

Senegalese Minister of Family and Childhood, Anta Sarr praised the initiative of ECOWAS which just strengthened the efforts of government to assure education for all.