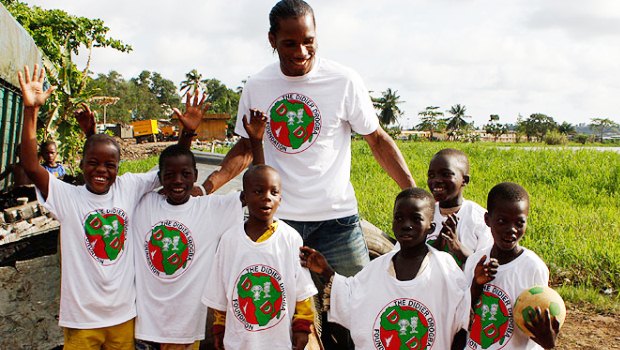 Beyond his player’s talent, Didier Drogba is a kind man who cares about the early childhood particularly regarding the promotion of quality education for all.

In a momentum of solidarity and through his association that moreover bears his name, the Ivory Coast football player gave 5000 school kits to the disadvantaged children of Niangon Lokoa village at Yopougon (Ivory Coast).

This action was made possible thanks to the partnership with Orange Ivory Coast.

The children of « Amigo Doume » center were more than happy to receive this « present » that will be for them necessary tool to prepare their future.

By the voice of his representative at the delivery ceremony of the kits, Drogba asserted that he would make more efforts to make Ivory Coast children happier.

By launching last May his own underwear line called « Drogba & Co« , the striker of Chelsea announced that for every sold product, one euro will be paid back to Didier Drogba Foundation that works in the field of health and education on the African continent and particularly in Ivory Coast.