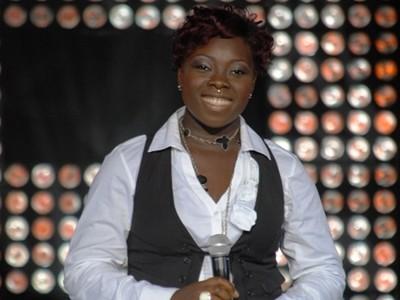 Nuella: the star of the African reality TV!

She won the biggest African reality show, the second edition of Africa Star, the equivalent of Star Ac in front of the Cameroonian Guy Michel.

It was her family and her friends who registered her for the Star Karaoke competition. « It was the beginning of my career ». She then participated in Africa Star. « By the grace of God, Ivory Coast won the first prize. »

Born from an alladjan father and a baoulé mother, she remembered her beginnings while she secretly dreamed of becoming a pediatrician though she knew that she did not have means to offer herself eight years of study. After her A level diploma, this non-ambulant girl continued with business and accounting studies in a specialized technical school before going to Italy in order to get herself treated and God directing her to music! « I often hummed at home. So, I learnt to sing in a choir, without participating in it. I went there sometimes, to listen to others singing as I like making it, because I did not believe in myself. (…) Today, I can assert that God directed me to music. Only God can give us glory. I have faith in God; I underwent 36 surgical operations in Italy. I was three times in coma. Nevertheless, I was able to obtain diplomas, to walk, to sing, to have certain level in music. All is divine favor. »

Nuella then had opportunity to work with African artists whom she admired: Patience Dabany, Salif Keita, Tiken Jah, Corneille and others.

She dreams of a United Africa: “Africans have to be united in order to move forward for a better Africa. Let us stop thinking in the place of others; it is what I said in my song « Wakoulézi ». Especially, let us not be vindictive in order to avoid chaos. It is always necessary to forgive.« [youtube]http://www.youtube.com/watch?v=UkLNn-HgcsU[/youtube]