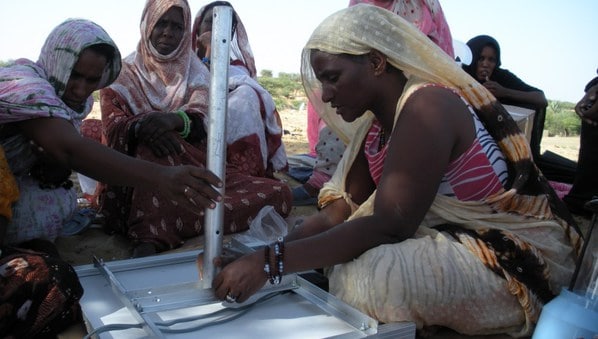 Francesca Moki and Helen Ntuengue, two less educated Cameroonian women took advantage of solar energy project of RUWDEC to take a training course of 6 months in an Indian school specialized in renewable energies. Since their return, they are profoundly changing the habits of Cameroonian populations deprived of electricity.

Both women have already electrified 98 households (500 people). They assemble and set up solar Kits composed of a refill controller, a panel and a battery. Their action facilitates education of children who can henceforth learn in evenings with light supplied by solar panels. On economic level, night markets are being developed in several villages since the return of both women.

The installations supply light for a duration of 8 hours; few to supply refrigerators or television sets.

Introduced by the Rural Women Development Center (RUWDEC), the solar energy project occupied the second ranking during the UNDP regional week on knowledge and Innovation in South Africa on 14th December 2013.

The initiative is supported by Najat Rochdi, the United Nations Resident representative in Cameroon who thinks about the extension of the project. « We are going to discuss with RUWDEC about the way of moving forward the project and, possibly, to extend it to other regions », she declared.