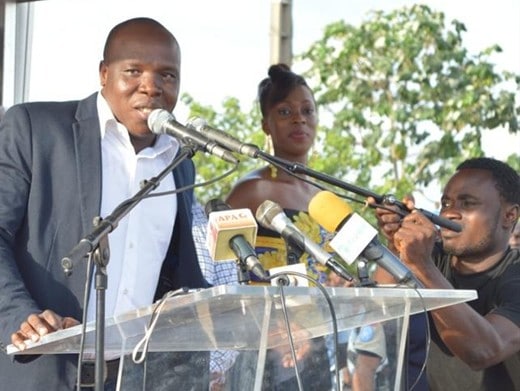 Magic System, the international famous group of Ivory Coast, did not forget where they come from. A’salfo (Salif Traoré), the helmsman of the group launched on 4th April in Marcory (municipality of Abidjan), the 7th edition of Urban Musics Festival of Anoumabo (Femua 7). Ivory Coast Ministers of Culture and education took part in this cultural meeting which carries the name of the village in which the artists ambassadors of Africa grew up. A nursery school was gracefully built for children of the municipality thanks to the support of “La Librairie de France” (The Bookshop of France)

Ivory Coast has been under the spotlights since Friday. The Festival of urban musics of Anoumabo mobilized for the 7th edition, 17 great African artists came from Bukina Faso (Sanaa Bob), from Mali (Tinder and Mariam), from Ghana (Gyedu-Blay Amboley), from Guinea (Fodé Baro), from RD Congo (Ferre Gola) and from Lebanon (Sae Lis’). ABlondy, Pierrette Adam, Surchocs, Affou Kéita also attended the event.

A’salfo (Salif Traoré), chairman of the steering committee for the festival congratulated himself on the implanting of the event in the Ivory Coast and international cultural landscape. Before launching the Festival, the group Magic System, author of « 1er gaou » the song that made their global success, was rewarded by Ivory Coast Minister of African integration and natives of Ivory Coast from outside. The « Magicians » received a trophy and an envelope for 800.000 FCFA for their contribution to African integration.

Magic System group was founded since 1997 and is composed of A’salfo, Manadja, Tino and Goudé Fadou mata.